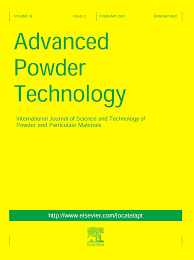 The discrete element method (DEM) which is used to simulate granular flows often assumes spherical shape for particles. This assumption is legitimized by the added complexity of non-spherical shape representation, contact detection and computational cost. In this work, the difference between the dynamics of non-spherical and spherical particles was studied in detail by a combined physical and DEM modeling approach. An in-house developed DEM software called KMPCDEM©, which was coded to handle non-spherical particles, was used to simulate the behavior of particles. To calibrate the model parameters, a model tumbling mill (100 cm diameter and 10.8 cm length) with one transparent end was used which made accurate photography possible. The tests were performed at filling of 20% and mill speed of 85% of critical speed with steel balls and wood cubes. In the simulation, each cubical particle was represented with clusters of spheres (with identical size) by particle packing algorithm for contact detection and contact-force calculation. Comparison of the simulation and experimental results showed that the difference between the measured and predicted impact toe, shoulder angle and bulk toe angle were 3, 4 and 5°, respectively. The significant change in the charge movement and structure on account of non-spherical particles was reflected in the amount of in-flight charge, and positions of shoulder, impact toe and bulk toe. It found that there was a 17% difference in the amount of in-flight of charge between cubical and spherical particles. The marked difference was attributed to higher interlocking of non-spherical particles in comparison to spherical balls. The results showed that cubical particles participated 5% more in the high energy impact action compared to that of the spherical particles. The simulation computation time increased by 35 times when the shape of particles changed from spherical to cubical.